This episode of slot wars is particularly sweet as Sugar Rush is facing the Egyptian-themed Queen of Gods. Both slots are developed by Pragmatic Play, renowned for making premium games, so you know this will be quite an interesting battle.

Round 1: Winning Potential and RTP

Featuring delicious sweet delight, the candy-inspired slot is played on a big 7×7 grid with 20 paylines. This opens doors to the great winning potential of up to 5,000x the bet.

In yet another release revolving around deities of Ancient Egypt, the playground is much smaller, featuring a 5×3 grid with 10 paylines. While nice, the winning potential is much lower compared to its rival as it goes up to 1,838x the stake.

It is quite clear who the winner of this round is. Since the winning potential is one of the most important features for players and it is much higher in Sugar Rush, this slot came up victorious.

Tumbles are one of Sugar Rush’s cornerstones, so let’s start with those. How they work is when a winning cluster hits, the tumble mechanic removes the corresponding symbols, and gaps are filled with symbols dropping down from above. If a new cluster is created by the tumbling action, the process repeats until no new win appears.

One of Sugar Rush’s cornerstones is the tumble feature. When a winning cluster hits, the reels tumble, removing the symbols and filling their gaps with new symbols dropped from above.

It’s quite basic mechanics, but there is a small twist to it. Every time a winning symbol is removed, its position is highlighted on the grid. After a symbol is removed from the same spot for the second time, the Multiplier Spots feature triggers, adding a multiplier to that position.

Three, four, five, six or seven Scatters landing together during a tumble sequence award respectively 10, 12, 15, 20 or 30 free spins. During free spins that you can also activate via Buy Bonus, highlighted spots and their multipliers remain in place and potentially increase with the next tumbling sequences. 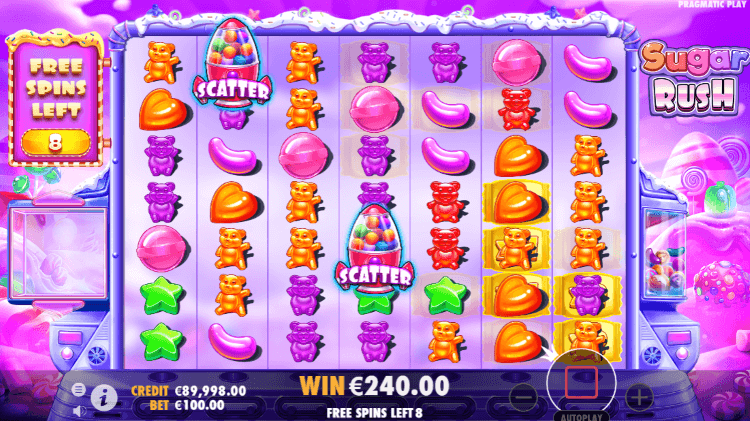 Any spin in the base game of Queen of Gods slot offers a chance for a Wild to drop fully stacked on reels 2, 3 or 4. That’s about it when it comes to the main gameplay, but more exciting things happen when a bonus round is triggered.

The bonus round is activated when three Scatters land simultaneously on reels, awarding 5x the bet and free spins. How many free spins you’ll receive depends solely on your choice.

After triggering the bonus round, you get to pick one of the four free spins modes according to your preferences:

While free spins are in operation, only the four premium symbols are present on the reels. Also worth mentioning is that the feature cannot be retriggered.

Only four premium symbols are active on reels during free spins, which creates possibilities for bigger wins. The bonus round can’t be retriggered.

As you can notice, the Egyptian delties are not so powerful in this Pragmatic release. The gameplay and bonus round are much simpler compared to the ones in Sugar Rush. This doesn’t make this slot less interesting, but does put game inspired by sweets into the lead.

Round 3: Visual and Audio Effects

There’s no doubt that the Ancient Egypt theme is one of the most popular video slot themes amongst players, but this is not an excuse for providers to recycle the same visuals and narrative over and over again. As Pragmatic already has shown in its Cleocatra slot, there is always room for a new take on the same subject.

That is why Queen of Gods is surprisingly unimaginative and offers the most simple and classic Egyptian slot, easily lost in the sea of similar ones. What does make it stand out is the impeccable graphics and animation, seen in all Pragmatic releases.

On the other hand, the theme of Sugar Rush is also generic, but its bright and colorful visuals make it more attractive. Mouthwatering gummy bears and other candies look delicious as the slot’s potential winnings. Once again, this slot is a winner of the round, mostly because of its theme – it is overused in the slot industry as well, but not as close as the Ancient Egypt one.

And The Winner Is… 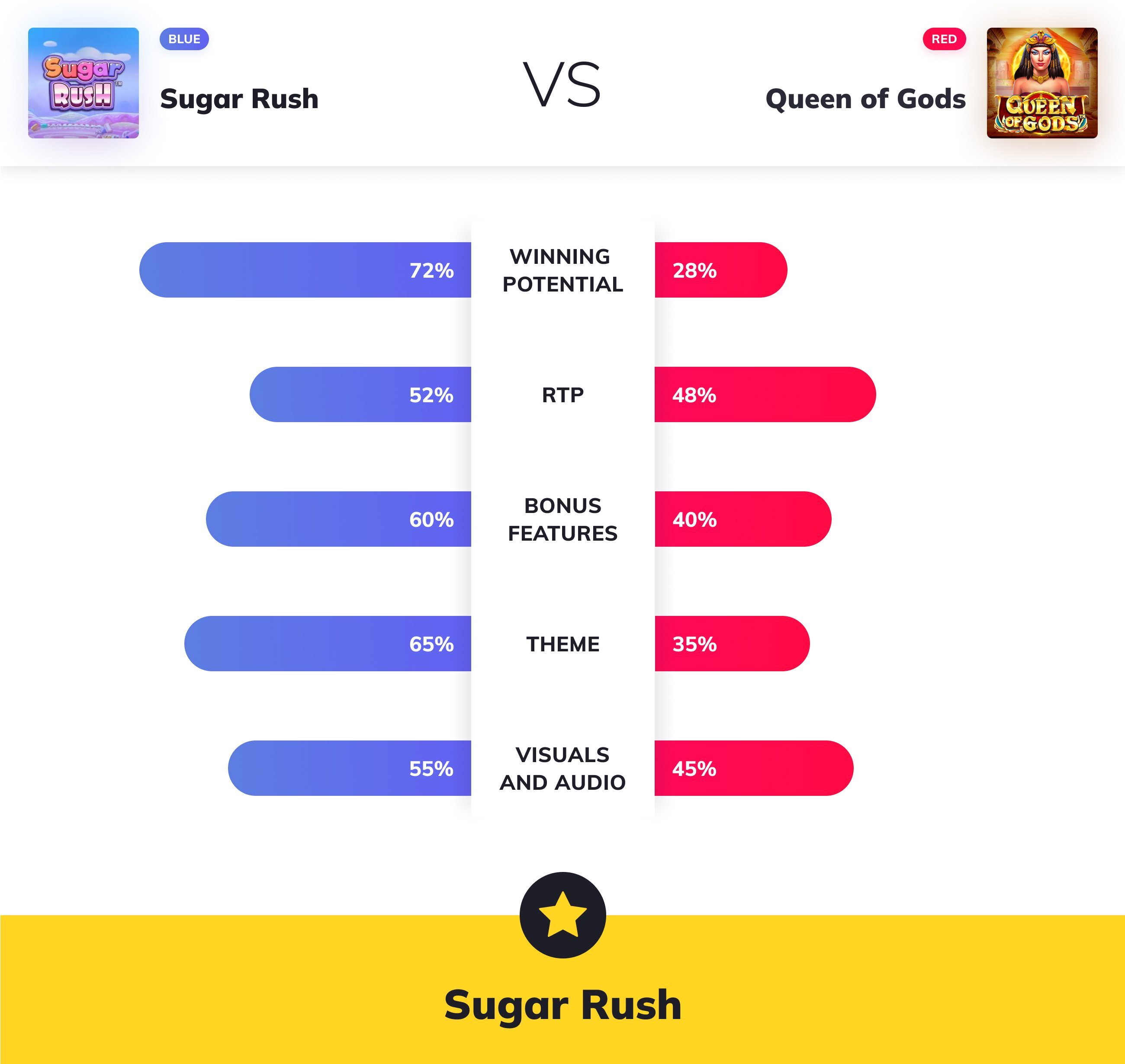 When it comes to slot wars, pronouncing the winner was quite difficult and required a lot of nitpicking. That isn’t the case this time as Sugar Rush has conquered Queen of Gods in all rounds. However, this might be because these slots are quite different and might appeal to different types of players. Either way, try them both and see which one better suits your preferences.

How Many Decks in Blackjack? Understanding the Role of Deck Quantity

Figuring the Return for 8/5 Bonus Poker with Four Progressives

New Slots To Play and Have Fun

Memory-chip sector suffering one of its worst routs ever