Another week, another opportunity for two slots to face each other in Slot Wars. In this episode, Pragmatic Play takes players to the jungle adventure with its Spirit Of Adventure slot on the one side and far to the mythological land guarded by the North Guardians on the other side.

Find out which slot will raise to victory – begin the slot war!

Round 1: Winning Potential and RTP

Spirit Of Adventure slot is played on a 5×3 grid with 10 paylines ready to unlock the winning potential of up to 5,100x the bet. On the other hand, North Guardians feature a bit larger playing ground with a 5×5 grid and 50 paylines, but offer a slightly lower maximum prize of up to 5,000x the stake.

The real money mode in the first release is available from just €0.10 bet per spin. Compared to the minimum of €0.50 which is the start of the wagering in the nordic-themed game, the jungle escapade might be more suitable for players who prefer less risk. Both slots have high volatility, ranked 5/5 by the provider. 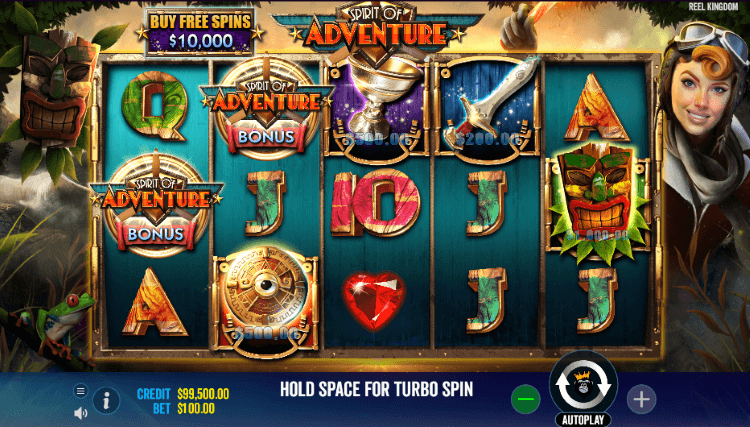 When it comes to RTP, the title with a female protagonist has a slight advantage over the ways of Vikings. However, it is a win by a thread since the difference is almost unnoticeable – the first release has an RTP of 96.60%, while the second one comes with an RTP of 96.46%.

Hence, the Spirit of Adventure slot is the winner of this section. But just due to extreme nitpicking which is the only way to determine the winner when two equally amazing games by the same providers are compared in the slot wars.

Neither of these games are lacking the special features, while the main one in the North Guardians slot is the Wild Pattern Wheel. Located next to reels, it starts to spin when two halves of the same triangle appear on the main grid beneath the regular symbols at the same time.

If the wheel stops on the ‘Level Up’ field, the player gets another spin at the next level. The wheel stops at the pattern will add Wilds on the grid in the corresponding order seen in such a pattern. There are five levels in total and since higher ones create better patterns, there is a possibility of filling the entire reels with Wilds. 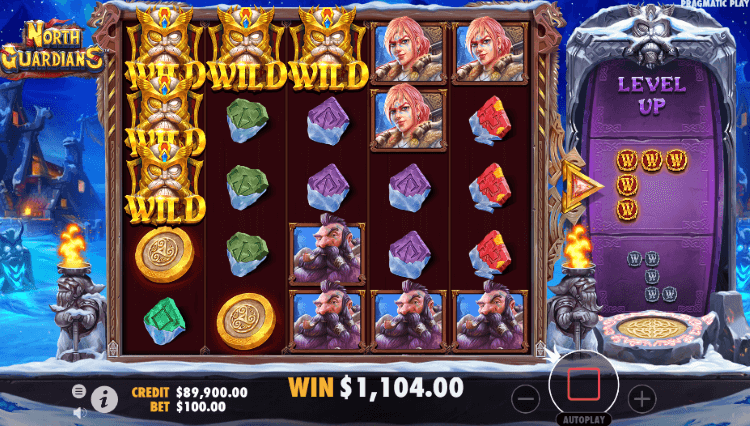 Another feature found in this slot is a bonus round with 5 free spins triggered by 3 or more Scatters hitting the grid simultaneously. During the entire feature, on each free spin, the Wild Patterns Wheel is active. Here the wheel starts on level 1 and doesn’t reset between spins if upgraded. In addition, every next level reached brings extra free spins.

The free spins round is not only present in Spirit Of Adventure as well, but it is its main attraction. Chances for triggering it are enhanced as there are two ways this round can be activated:

Now, on each spin, the wild symbol moves to a random position, replacing what would be underneath it. Then, it collects the values of all relic symbols that are adjacent to it, In addition, each 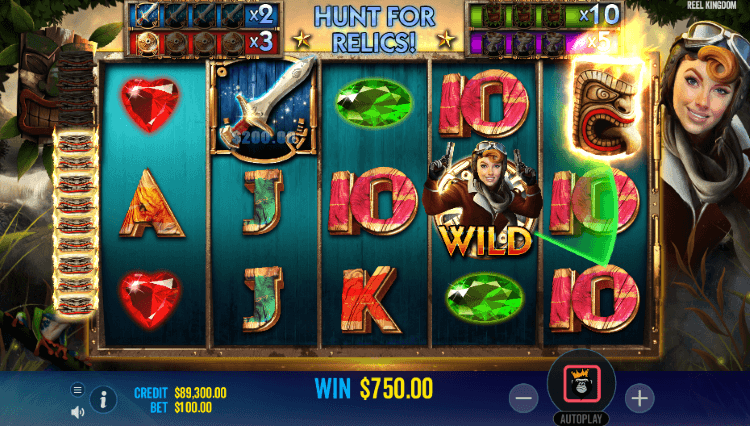 Here’s the twist – on each free spin, the Wild jumps to a random position, replacing the symbols underneath. It also collects the values of all relic symbols adjacent to it horizontally, vertically, or diagonally and every time a relic is collected by the Wild, the relic is also collected on a trail.

Different symbols collected on trails have the value of their collection multiplied by 2x (swords), 3x (discs), 5x (chalices) or 10x (masks). Additional free spins are awarded when a trail is completed. When free spins end, a 1×1 Totem symbol appears on the grid and moves randomly on every spin. This continues until the Totem and roaming Wild land at the same position.

Just when you thought there were no more turns, the Mystery Prize box pops up on the screen. At the end of the free spins feature, this feature gives players the choice to either take the win or gamble it by choosing the mystery prize instead. 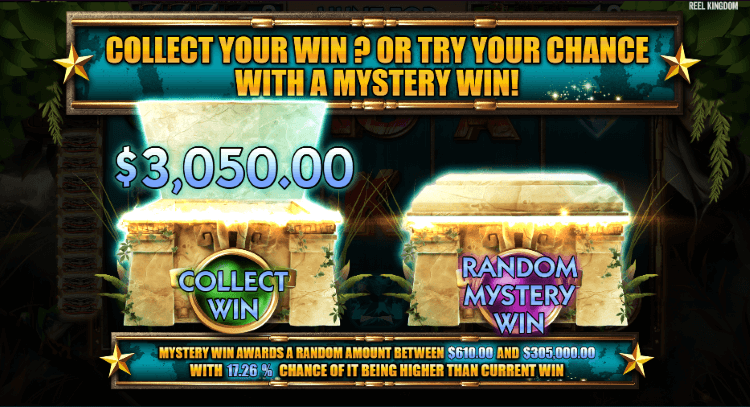 Both of these slots have the Buy Bonus option. For the same price of 100x the stake, inpatient punters can trigger free spins at any point of the base game.

Although both games have strong bonus rounds with Wilds in the spotlight, Spirit Of Adventure has a small advantage thanks to its Mystery Prize. Since it is basically a gambling feature it does provide slightly more excitement.

Round 3: Visual and Audio Effects

Pragmatic Play not only make its slots highly entertaining but quite visually appealing as well. It is known in the iGaming industry for its state-of-the-art graphics and superb animation, while the design never derails from the theme.

Like all other games in its premium portfolio, these aren’t the exception either. The themes used in these releases are completely different – one presents the jungle expedition of the brave female protagonist, while the other revolves around Norse mythology.

Since Spirit of Adventure is a bit more colorful and neater while North Guardians slot may seem a bit crowded sometimes, it can be said that the first release gets the win here as well. However, since different players have different tastes and preferences regarding visuals, both slots are winners in their own way.

And The Winner Is… 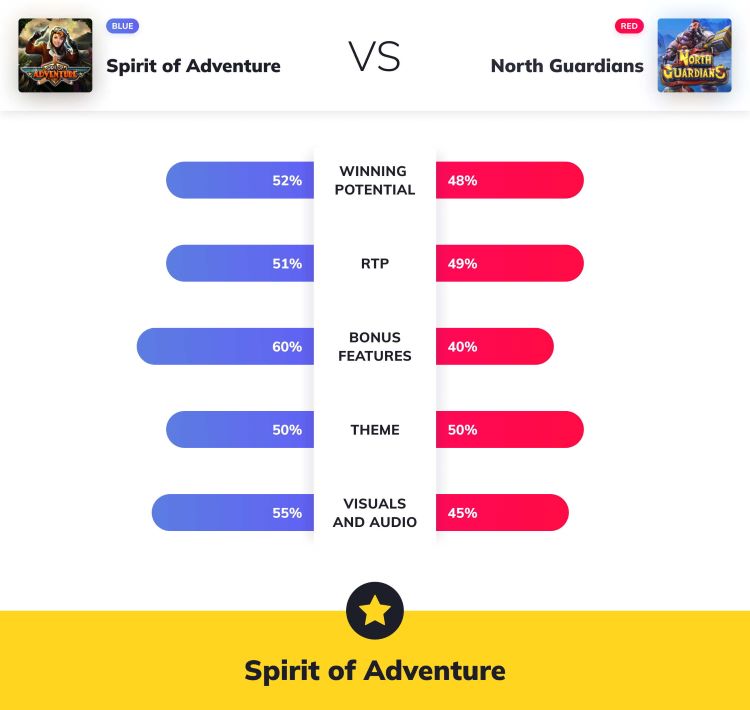 It’s not the first time that is very hard to determine the winner of the slot war as the two games are equally amazing. That happened in Gladiator Legends VS Hand Of Anubis and it happens once again now.

Still, it wasn’t close as in that episode of slot wars, but if you look at numbers you can see that Spirit Of Adventure has defeated North Guardians slot by a hair split. This just proves that both of these games deserve your attention, so don’t hesitate to try them out.