Pragmatic Play decided to rekindle one of the most beloved in its new slot Greedy Wolf. Once again, three little pigs have to defend their homes from the big bad wolf, but this time on reels.

Set on the 5×4 grid with 20 paylines, the iconic characters draw inspiration from the famous tale “The Three Little Pigs”. As in the story, the wolf is puffing and huffing, raising the winning potential up to 3,000x the bet.  After stopping the silverback in Gorilla Mayhem, players have a chance to try out another high-quality slot by one of the best iGaming providers. 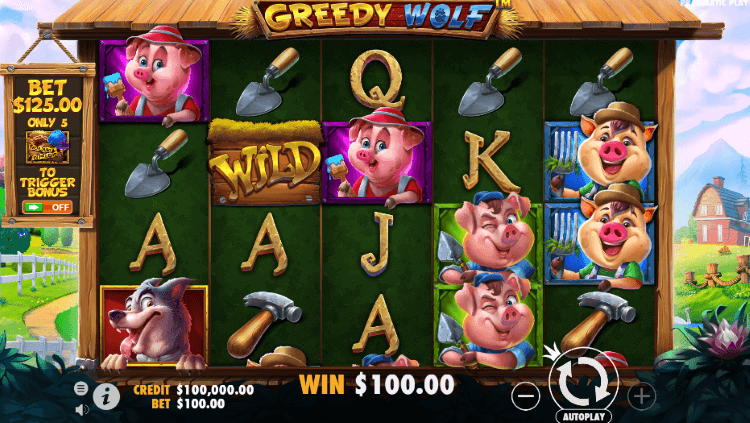 Superb graphics and fantastic animation evoke childhood memories of the famous story, which cartoonish symbols follow completely. But don’t be fooled by the adorable visuals – this is a very volatile title, ranked 4.5/5 by the provider.

Featuring an RTP of 96.48%, the release has an AntiBet option. When turned on, it increases the bet by 25%, in return lowering the number of Scatters required to trigger the bonus round to 5. Play this game in real money mode anywhere from €0.20 to €100 bet per spin.

The slot is packed with quite a few exciting features and special symbols, starting with Greedy Wolf Wild. On reel 3, Wolf symbols can land fully stacked and expanded. This happens entirely randomly and when it does, all pig symbols in view are transformed into Wolf symbols.

3 Little Pigs Wilds and Respins feature is also activated randomly, adding a random number of Wilds to reels 1, 2 or 3. Then, the Wolf creeps up to potentially move Wilds one position to the right, triggering a respin along the way or blowing off Wilds from the screen and ending the feature.

On random non-winning spins, the Wolf can appear, huffing and puffing until he blows all the symbols away. A new batch of symbols drops from the top, either guaranteeing a win of at least 20x the stake or landing enough Scatters to trigger free spins.

Speaking of free spins, this bonus round is triggered when 6 Scatters land on the grid at the same time, awarding 6 free spins. Triggering Scatters have straw frames placed around the position they landed.

If new Scatters land during the feature, they also get frames placed on their positions, while a batch of 3, 4 or 5 of these symbols awards an additional 1, 2, or 4 free spins. In case a Scatter lands on an already framed spot, a cell is upgraded – to wood, then bricks, and ultimately to castle. 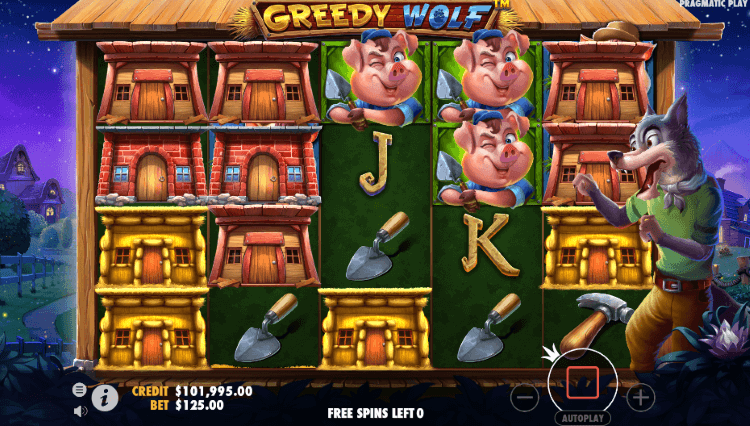 At the end of the bonus round, the framed positions are converted into houses. The wolf makes his appearance and blows the houses away to reveal money prizes. Based on the type of house, prizes differ.

Greedy Wolf slot is yet another superb addition to the provider’s diverse portfolio of premium casino games. Since Pragmatic Play releases up to 7 slots per month, the new exciting title is already on the horizon.