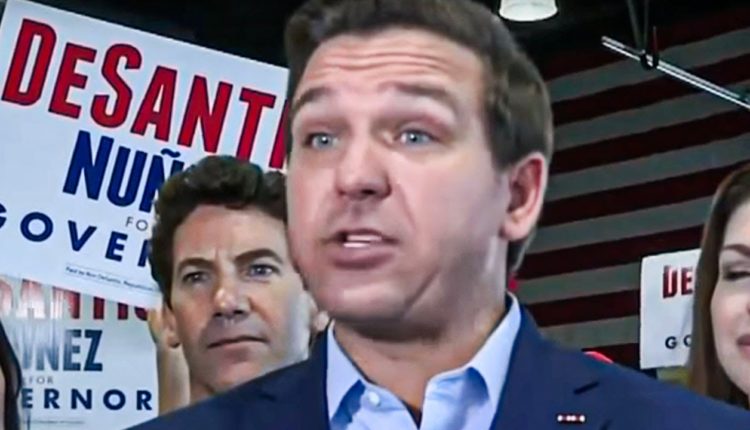 Florida’s Trump-loving Republican governor Ron DeSantis traveled the to the Texas border recently to see how Florida’s resources are being used, and to hold a propaganda press conference with Texas governor Greg Abbott. But all of that was the window dressing – the real reason for the visit was to raise more money for both his reelection campaign and a possible presidential bid in 2024. DeSantis is widely seen as a favorite among Republicans, and this trip was to pander to low-information voters and get them to open their wallets to him. Ring of Fire’s Farron Cousins discusses this.

Support us by becoming a monthly patron on Patreon, and help keep progressive media alive!: https://www.patreon.com/TheRingofFire

Find our merchandise at Teespring: https://teespring.com/stores/rof-store

Support Ring of Fire by subscribing to our YouTube channel: https://www.youtube.com/theringoffire

*This transcript was generated by a third-party transcription software company, so please excuse any typos.

Florida governor Ron DeSantis headed over to Texas over the weekend to see exactly what the roughly 50 state law enforcement officials are doing over there in Texas. Now, if you’ll recall, a couple of weeks ago, Ron DeSantis was just one of several Republican governors who said, oh my God, the border crisis in Texas is so horrible. We’re going to send over some of our law enforcement officials, uh, 50 ought to be enough to totally secure the Texas border. Yeah. That’s what you do when there’s actually a crisis. You just send over a couple dozen, like, ah, you guys, you get over there, go. He also sent over equipment as well. And Texas actually made it clear this past weekend when Ron DeSantis was over there, they’re not reimbursing the state of Florida. But Florida officials assured us, don’t worry. We’ll figure out how to pay for it. They don’t know yet how we’re going to pay for it.

But they, they assured us they’re gonna, they’re gonna figure it out eventually. So anyway, DeSantis over there in Texas goes down to the border, walks along the border. Then he holds a press conference with Texas governor Greg Abbott and DeSantis, of course defends his decision to send 50 law enforcement officers from Florida over there. Defends his decision to send equipment. The whole thing, they do this little press conference. We’re cracking down on the border, Biden and Kamala, they’re not doing anything down here. We’re taking care of things ourselves because that’s what we do. And then the veil dropped and we learned why Ron DeSantis was really there because shortly after his little press conference with the governor, Greg Abbott, over there in Texas, they sent out an email. And here’s what the email said. If Joe Biden and Kamala Harris choose to pander to the left wing open borders base of their party, rather than keep our nation safe, then it is up to the rest of us to do what is necessary to combat this crisis.

That’s why when the governors of Texas and Arizona asked for help, I was the first governor to send resources. And then at the bottom of the email, it had a little section where you can go and donate money to Ron DeSantis. Yes, folks, this was a fundraising email. And it’s hilarious, by the way, that he puts it in the email like, oh, if Biden and Kamala are going to pander to their base, then I’m going to pander to my base and send Florida resources over to Texas to address something that’s not even an actual crisis. And then I’m going to highlight that I did that and beg you for money. If you are a Republican and you can’t see through what is happening right now with these Republicans, then there is no hope for you. Okay. This was so glaringly, painfully obvious, just like Ted Cruz with him going down to the border all the time and talking about the border and nothing but border, border, border, border, border, border, border. Folks, look at the news stories where they have actually gone down to the border. And I’m talking about independent reporter’s, gone down to the border, visited border towns and asked the people here.

Where’s this influx of immigrants? Because the people who live in those towns will tell you it ain’t there. It’s not happening.

Top Taliban Official Speaks To TODAY About US Evacuation From Afghanistan